Hello and welcome to the Cotford Hotel. I’m Chris Morgan, the Chef-Patron of L’amuse-Bouche Restaurant and I run the hotel with my wife Barbara and supported in the kitchen by Head Chef Alex and a small team of talented young chefs. We’ve developed our own brand mix of modern and traditional French-style cuisine using only fresh, locally sourced where possible and organic produce and now work with a team of artistic and flamboyant chefs in the restaurant to create menus that keep our guests coming back for more.

More recently we have won The Worcestershire Restaurant of the Year for 2016, 2017 and 2019 thus allowing us the represent the county in the England Finals

Although I have a wealth of experience within the industry, our new Chef, Alex Boghian has recently joined us and has the most amazing background in the industry and depth of artistic talent.. His pure passion for the theatre of food that we are in is incredible and he brings a wealth of new ideas to the table.

The forward thinking and direction of our restaurant is very much of team thinking and the theatre that our guests experience on the plates is a culmination at traditional cooking at its best coupled with modern ideas and skills brought to the fore.

I’ve been working as a Chef for 40 years now, and I’ve been lucky enough to travel the world doing something I love. Originally from a farming family near Oxford, I was inspired by my step-mother who had a wonderful talent for cooking and presenting food interestingly. I studied catering at college in Oxford and then became a Commis Chef, working with Michael Quinn MBE (of The Ritz fame) at the Bear at Woodstock.

I then moved to the South coast and at the age of 22, was given the position of Head Chef at the 60 bedroom Mercury hotel in Seaford. Soon after that I was elected Master Craftsman of the Craft Guild of Chefs (Master-Chef), the youngest recipient of the award, and offered membership of the Association Culinaire Française.

Within a year I was offered a position with the Hilton group as a Head Chef and was promoted twice in two years before opening The Hilton at Bracknell, which I used as a base over the following years in my role as Regional Executive Head Chef for Hilton Hotels. Since then I’ve worked at the Rembrandt hotel in Knightsbridge and the 5* International hotel in Port Moresby, Papua New Guinea, before spending 15 years on the fringes of the Cotswolds running my own restaurant with rooms and finally settling here in 2007 on the slopes of the beautiful and picturesque Malvern Hills.

Book now: reservations@cotfordhotel.co.uk
(Room bookings are subject to payment in full if cancelled within 48 hours of arrival)

Our afternoon teas are very popular throughout the year and make the perfect treat in our cosy lounge.

Give the perfect present for the foodie in your life. Our gift vouchers are available at any value to suit the occasion and budget. They can be redeemed against a stay at our hotel or any food and drink within our bar or restaurant. Valid for 6 months from the time of purchase. 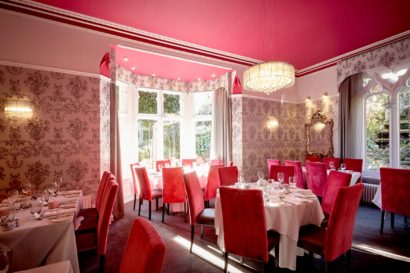 Stay with us for a minimum of two nights and enjoy breakfast and an evening meal too.

Prices are per room, per night and include a full English breakfast and two course evening meal from our á la carte menu.

*Based on two people sharing.